Are you a Security PreSales Ninja?

Take this quiz and determine if you are a Security PreSales Ninja.

NOTE: this quiz has a 20 minute time limit to complete.

Enter your full name and email address in the results table to save to the leaderboard! 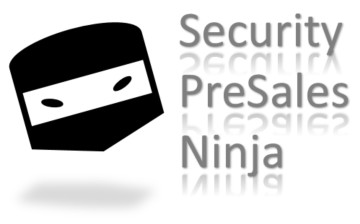 You have already completed the quiz before. Hence you can not start it again.

You have to finish following quiz, to start this quiz:

I have come across many prospects over the last 6 years that are only trying to acquire a SIEM solution to satisfy a compliance requirement, or what we call in the industry, “check-box purchasing” – they have a minimum set of requirements, specific to only one business unit or compliance mandate that is completely siloed from the rest of the organization.

Here is how this conversation usually goes:

Client: “we would like a SIEM tool that will help us monitor our 200+ Windows Servers for PCI-DSS compliance”

Me: “What other event sources are you going to be monitoring with the solution?”

Client: (Stunned look) “we only need to monitor our servers.”

Me: “PCI-DSS requirement 10 states you have to monitor the logs from all of your security devices and servers that are deemed critical assets.”

Client: “our department is only responsible for the servers we listed.”

Me: “To get value out of a SIEM solution and monitor all 12 PCI requirements you need audit logs from all of your devices and contextual information regarding your network, asset and vulnerability data – and that will just get you started.”

Client: “Perhaps we need to increase the scope – we’ll get back to you.”

While the Centralized Log Management (CLM) and Security Information and Event Management (SIEM) vendors will be lined up around the block to influence the sale, the vendor you choose should be a trusted advisor. They will be interested in providing you the most value from your investment and assist you in designing a solution to satisfy many business problems that goes beyond a traditional security-centric SIEM. This is why you will need to identify key device types and the value that can be derived by cross correlating the log data with business context to align monitoring with your governance, security and compliance initiatives.

While each of the event sources you collect events from will provide distinct reporting and alerting value, combining many different “types” of event sources will derive immediate intelligence about the business and help analysts establish baselines of threat activity. One of the other benefits is that incidents can be prioritized by business value, threat classification and the additional context can help reduce the plethora of false-positives or false-negatives that plagues every CLM solution.

Additionally, the multitude of the various technologies have their own management and reporting solutions that become “silos of information” that only the black-belts responsible for each of the device types are able to decipher. This makes security intelligence and investigations near impossible when an analyst has to request log data from the owners or log in to many different systems to find the evidence to support their cause. Essentially, they would have to piece together the clues and manually normalize the data using a technique called “Spreadsheet Kung Fu”, which would be fraught with assumptions and inference.

Below is a list of different device types and the value that can be derived from each when correlated together. The list isn’t exhaustive and I’m not suggesting you need everyone mentioned to successfully deploy a SIEM, but the more data feeds you can correlate, the more intelligence you will have available in the future to expand and grow with your business (click “more…” for complete article):

END_OF_DOCUMENT_TOKEN_TO_BE_REPLACED

How to Become a C.S.I. – Enterprise Forensics using a SIEM

Gary Freeman – SecTor 2013 Sponsor Session
Many Security Analysts are tasked with assisting in Corporate Governance. This session explores the concept of network forensic investigations using a SIEM, and how security analysts can use it to assist in Governance, HR or law enforcement with network interception to gather evidence that must preserve chain-of-custody. With the challenges of cloud-based computing and mobile devices, the need for well-defined workflow and the use of industry-accepted tools is even more essential than ever. Get familiar with Using integration Commands on-demand to gather external data for an investigation.

This handy calculation can then be used on my other calculator NetCerebral’s Simple Log Storage Calculator as the average EPS, need as the primary input to calculate amount of storage and IOPs required for the EPD and retention periods defined.

It’s been a while since I had to put my SANS Incident Handling hat on or did root-cause analysis and Network Forensics on an actual attack this close to home. December 13th, 2011 marks the day that 144 websites mapped to the same IP address hosted by HostPapa were injected with a number of files that replaced their home pages with that of some script kiddy’s – website defacement on a large scale. Admittedly, netcerebral.com was one of the 144, as were two others, that I manage part-time.

The attacks appeared to originate from Kuwait (inconclusive) and when I traced the names of the attackers, their email addresses and the “Muslim Hackers” they were sending “GR33T5” to, it became evident that this was “bragging rights” under the shroud of “hactivism”. In fact, the hackers went as far as to list all 144 websites hacked at the same HostPapa IP address on www.zone-h.org, a pubic attribution of website defacements where hackers brag and place “mirrors” of the website defacements as proof of their misconduct.

The hackers jointly go by the alias of “7rb-team” and, according to zone-h.org, have successfully defaced 3,414 homepages since December 2nd, 2011 (and are currently still active with almost 100 defacements daily, in January 2012 alone).

Since HostPapa has not provided the access logs for the date of the attack (they had been requested but HostPapa doesn’t keep archives) we are left to assume the attack vector that was used to inject the PHP code into the websites. I have narrowed it down to either a SQL Injection or PHP URL Inclusion. The sites all had “wp__” ID tags on the WP core, no .htaccess files, out-dated WP PHP plugins and a number of other vulnerabilities, inherent to WP (themes are another possibility). I suspect the attackers used recon scanning to detect the open vulnerabilities on the site and then compromised the vulnerability to write files to the root of the virtual directory.

Once the PHP shell was injected, they connected remotely and ran the Syrian Shell which automated the creation of all “index.htm” files and downloaded all of the other artifacts that I found on the site.

The service provider  detected the mass infection across the customer’s sites a day after the attacks and shut-down the sites. They opened a ticket and notified one of the billing contacts that the site had been shutdown and instructed us to backup the site so they could wipe it away and we could then manually restore the site. Fortunately, I had backups that I had done months prior to the attack but some of the newer posts were missing. The other issue is that, while I had backups of the site directories and MySQL for each, the attackers had injected files to the home root directory that needed to be cleaned up as well (directories such as /cgi-bin, /cpanel, etc were all infected).

I eventually decided to backup the entire site with all three domains, download and unzip them on my local PC, where I had Apache, PHP and MySQL running in a VM sandbox. I went through the painstaking task of removing 50+ occurrences of “index.htm” (the defacement page) and 5 instances of PHP shell kit code that had been injected in the root of the parent website. Next, I dropped all of the tables in two of the databases (the third site doesn’t use a DB) and restored from backup in MyPHPAdmin. Once the sites were functioning the way I wanted, I upgraded the WP core, updated all plugins and then installed WDS Security plugin, which found additional vulnerabilities, which I cleaned up on both sites.

One other advantage of having the VM sandbox is that after I made a backup and export of the sanitized site, I reverted the VM snapshot back to when the site was infected and played around with the Syrian Shell (not recommended in a prod environment!) and could replicate what the attackers did once they had the PHP file uploaded to the site.

When you open up the code in an editor the first line of the code reads:

Apparently the attackers didn’t read this line and showed no discrimination about who their targets were going to be.

The malicious script also comes with a GNU Public License disclaimer with more preamble about attacking Israel and then proceeds to allow the attacker to configure their own password for the shell.

The script then immediately starts to list privileged functions such as:

To be fully convinced that I was no longer at risk, I upgraded to the latest WP v3.3.1 on all sites, updated all plugins, disabled any that weren’t in use, created .htpasswd and .htaccess files and installed the IP Filter plugin to block a list of bad IP addresses and installed WDS Security on all sites (and corrected an y issues detected by WDS). I have since started to automate backups of the MySQL database and WP files so next time I get  hacked, I can simply drop all the tables in the DB and restore from a backup.

I have definitely learned a valuable lesson in how vulnerable PHP/WP is and will stay on top of the site with updates, etc.

Powered by WordPress and WordPress Theme created with Artisteer by Gary Freeman.